From investment banker to midwife 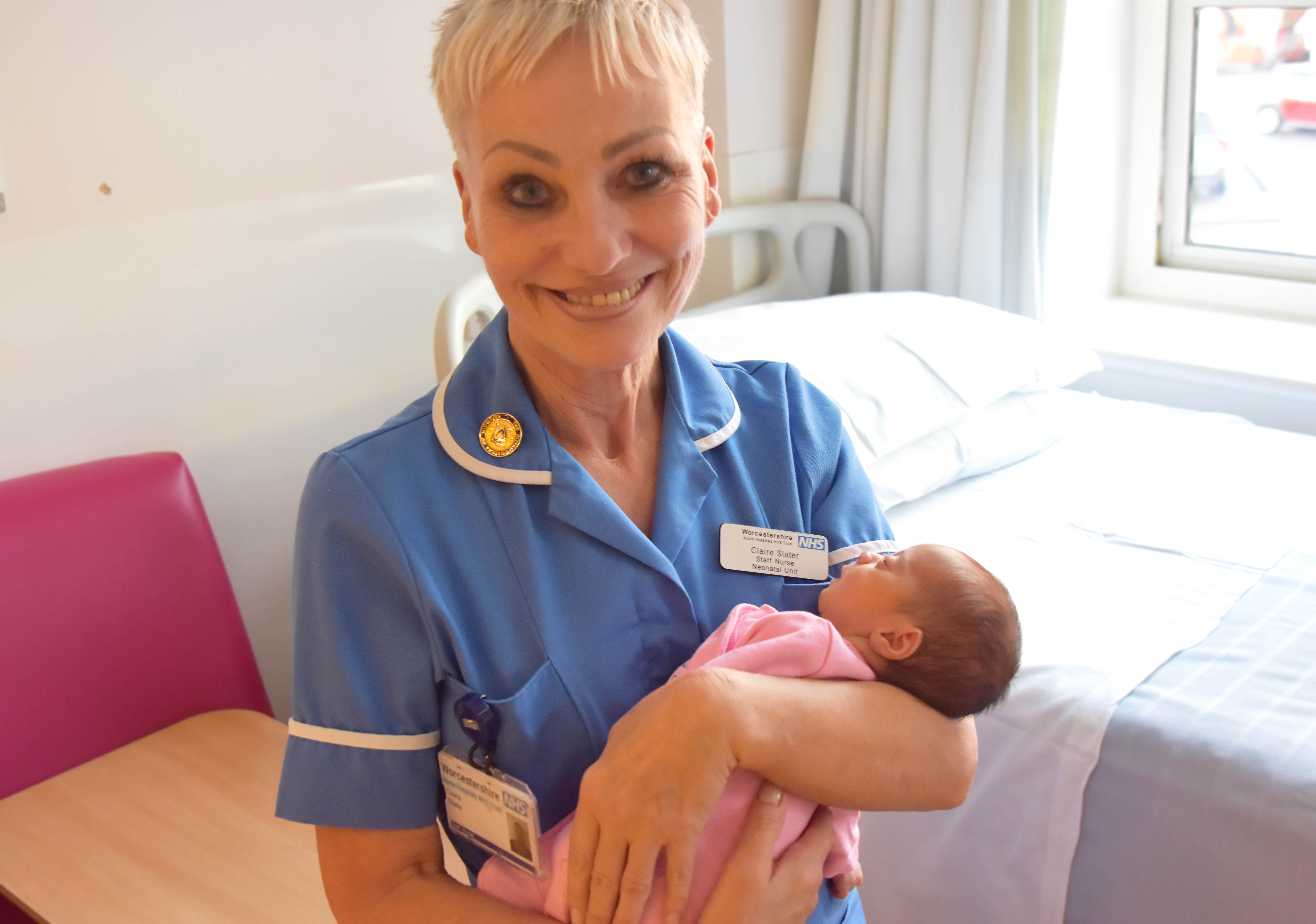 A former investment banker has started a new career in the Neonatal Intensive Care Unit at Worcestershire Royal Hospital after finally fulfilling her childhood ambition to train as a midwife training at the age of 61.

Claire Slater, from Redditch, recently started her dream job in the Neonatal Intensive Care Unit (NICU) after completing her midwife training at the University of Worcester last summer.

“I had always wanted to be a midwife. Ever since I was 10 years old I’d always dreamed of doing it as a career – but life had got in the way and my parents had encouraged me to use my A-Levels and go to University instead”, said Claire.

It is not the first time Claire has worked in Worcestershire’s hospitals; Claire began her working life as an auxiliary nurse in a surgical ward and A&E at the Alexandra Hospital in Redditch – working twilight shifts in order to look after her young children – before becoming a radiography technician at the same hospital.

"Since starting in NICU there hasn’t been a day of work that I haven’t loved. Everyone on Neonatal has been patient, kind and supportive."

As her five children grew older, Claire worked as a primary school teacher for several years before being headhunted to work in the banking sector. A successful career in investment banking in the City of London followed, including a spell as a regional director of a large multi-national company.

“I was approached to join an investment banking company, and after taking my exams I ended up joining Barclays Wealth in Canary Wharf. I then had some time at Lloyds before moving to Standard Life as a Regional Director through the 90s and into the early 00s”, said Claire.

After a period of illness, Claire revaluated her life and career options and decided it was time to do what she had always dreamed of doing.

“I wanted to train for a while but we couldn’t afford to give up my earning to go through training. It was a busy time for us with our children all needing to be supported through university and getting married. It was after our fourth child’s wedding that my husband said to me, ‘right, what is it you would most love to do’, and that’s when I said, ‘well I’ve always wanted to be a midwife’”, Claire explained.

Claire was accepted onto a midwifery course at the University of Worcester, which involved training placements at Worcestershire Royal Hospital, and it was on one of these placements where she decided exactly where she wanted to end up.

“On my training course I did a placement on NICU and I absolutely fell in love with it. I love babies and their mums as well. But I think that mum and baby relationship and bond is massively important. I feel that I get to experience the most of that special bond and see more of the baby growing on the Neonatal Unit”, added Claire.

Completing her midwife training course in August, Claire applied for a position in the Neonatal Unit which accepted her to join the team. Despite the stage of her working life, Claire is determined that this is only the beginning of a new chapter for her.

“Some people have been surprised to see me join, especially being newly-trained at my age. People have said to me ‘why are you doing this? Why don’t you just retire?’, but I’d like to work for as long as I’m able to. I really love it here, I’m not just in this for the short-term, I actually want to do some more training”, said Claire.

Claire added that since starting in NICU there “hasn’t been a day of work that I haven’t loved. Everyone on Neonatal has been patient, kind and supportive”.

She advised others in a similar situation who still wish to get into the career that “no matter your age, just do it! If you’ve got the energy and the enthusiasm to do it, why wouldn’t you? Sometimes it’s just about waiting for the right moment, and it’s meant more to me by having to wait longer, but it’s been worth the wait”.

Sharon Ali, Matron for the Neonatal Unit said, “Claire is always smiling you can tell how passionate she is about this role, nothing is too much trouble. She has already made a great impression on the families she has cared for, listening to some of the feedback you would have thought she had been doing this job for years!”